Ok, what the hell is this? I love mushrooms. I still think they may have an extraterrestrial origin. But these recent visitors to my front yard are just so weird. They appeared under my live oak tree (Quercus virginiana), where death cap mushrooms used to grow, and lasted for over a week.

I initially thought they were a conglomeration of dog poop, since from above they are shaped and colored like that — thus my neologism “copromorphic,” i.e. “dung shaped.” But I got closer than I would to poop, and what’s REALLY weird is the pairing of a classic “mushroom-shaped” mushroom on the left with the odd fellow on the right! (There were a few of these pairings). I thought maybe it would mature, and perhaps grow into a more mushroomy form, but that didn’t happen. And there were no gills or spores; the powdery cocoa-colored powder on top separates easily, so I think this fungus must spread its spores like a puffball mushroom.

The dog poop has morphed into a dog bone. Yes! The mushrooms in question, after about a week, had matured into this bone-joint shape. At this stage, they were almost woody to the touch, though have since nearly completely disappeared.

Oh I also found this guy in my yard: 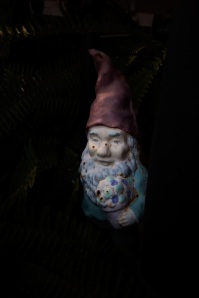 Any input on the fungi is appreciated.