Key Biscayne sits off the east coast of South Florida, just south of Miami Beach, and north of the beginning of the Florida Keys archipelago. It faces out to the Atlantic Ocean, with its back to Biscayne Bay, and the mainland. It’s certainly been of strategic and maritime importance since before Europeans colonized Florida, and ancient Native American as well as more recent habitation has been uncovered there by archaeologists: (http://www.amazon.com/Digging-Miami-Robert-S-Carr/dp/0813042062).

The Florida Reef made a lighthouse in this location necessary, and one was built in 1825 to warn of the reef and guide ships sailing to and from Key West and Cuba.  On July 23, 1836 during the Second Seminole War, natives sailed covertly to Key Biscayne, and attacked the assistant lighthouse keeper John Thompson and his helper Aaron Carter, all others, including the head lighthouse keeper, having left for a safer Key West.

It was a messy onslaught. Thompson and Carter ran to the lighthouse and barred the door, which the natives set fire to. They fled to the top of the lighthouse, but the intense heat forced them onto the outside balcony. Carter died from his wounds there while Thompson fired his musket down on the natives raiding his home. A store of oil for the light caught fire, creating a giant chimney out of the structure. The story then goes that Thompson tossed a cask of gunpowder down into the fire to end his misery, but the explosion just destroyed what was left of the staircase. Thinking Thompson must surely be dead, the natives departed. The U.S. revenue cutter Washington witnessed the smoke, and hearing the explosion came to Thompson’s rescue. 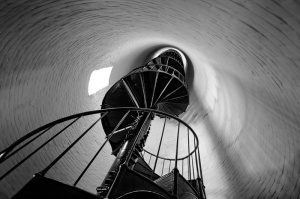 Climb to the top

That lighthouse sat unusable for a decade. With navigation and populations growing and the reefs still a great hazard, a new light was commissioned in 1846, using bricks from the original light, as well as new materials. The new light began operating in 1847. It was attacked by Confederate forces during the Civil War, but was repaired. The same “new” light stands there still today, and also sits on one of the most beautiful beaches in the country. 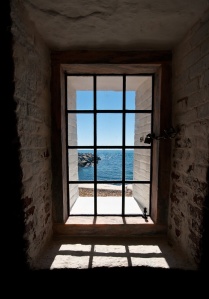 View from the lower window

This beautiful lighthouse has seen its share of U.S. history.