Spring is different in South Florida than in most parts of the country. Though we do have seasons, their transitions are more recognizable due to changes in humidity and the amount of time the sun spends above the horizon than to temperature. And while now, in early May, it may still be chilly in parts of the U.S., it’s consistently in the 80s during the height of the day here in the sub-tropics. And a month ago the temperature wasn’t noticeably colder. It was just a bit drier outside.

Nature takes notice of these variations however. Want some evidence spring is here?

I took a deliberate, contemplative stroll through my favorite hardwood hammock recently. Now, in recent months the desiccation of winter meant there was little to photograph; even the numerous tree snails had closed up shop (and shell) for the dry period. That things were waking up was evident on this stroll however. Tree snails were on the move, at their own wonderful pace. It was nice and damp; moss was reviving. 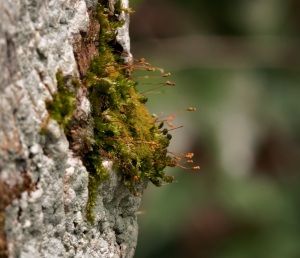 A verdant and vertical world

Besides moss, my beloved fungi were popping up again: 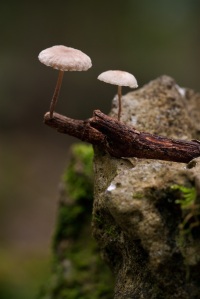 Mushrooms on the edge

These tiny twin mushrooms were clinging to a twig itself balancing on a chunk of sharp coral rock. But animals were not to be outdone. A mother laid these eggs gently on moss within this decaying wood. They were about the size of green peas; I can only image what’s inside, but I would hazard a guess of a lizard. They look like gecko eggs I’ve seen, but the surface is textured differently and these are also a bit larger. 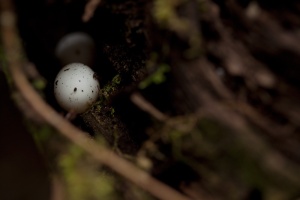 Much more fecundity was to be seen before the day’s end! Among lots of plain old garden snail shells was sitting this perfect egg. It was so satisfyingly, well, egg shaped! I gazed searchingly into the canopy above it, but the nearest tree limb was at least 30 feet up. I didn’t see a nest, but regardless there was no way I could return the egg to it anyway. At at least an inch long, it must have come from a good-sized bird. Maybe it was a snake egg. I rolled it around, feeling the weight and heft of something inside; there was nothing but to place it gingerly back where I found it, cushioned on pine needles. 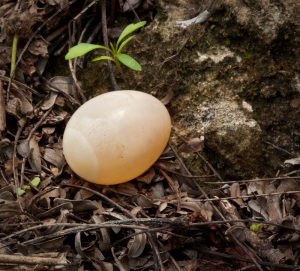 The biggest gift of the day came about somewhat ironically. A birdwatcher from Washington State I met near the trailhead had told me he hadn’t had any luck all day in spotting anything unusual. I walked on anyway, not mentioning that I was mostly hoping for a flush of fungi after the rain we’ve been getting. I rounded the trail and passed an unusual tree I’ve passed dozens of time. It’s got a hole where one major offshoot of the trunk turns horizontal. I saw something in the manner people see ghosts: briefly, ephemerally, like a wisp you might just have imagined or a flash of light created by your eyes and existing only in your mind. It looked like the broad face of a small owl. I couldn’t believe my luck. I set my camera on a tripod and made some little noises, but of course the shy, retiring owl hunkered down in its nest deep inside the tree. I walked away down the trail, then walked back. I was sort of pacing. I didn’t fancy abandoning this opportunity. I had one more photographic weapon: my iphone! 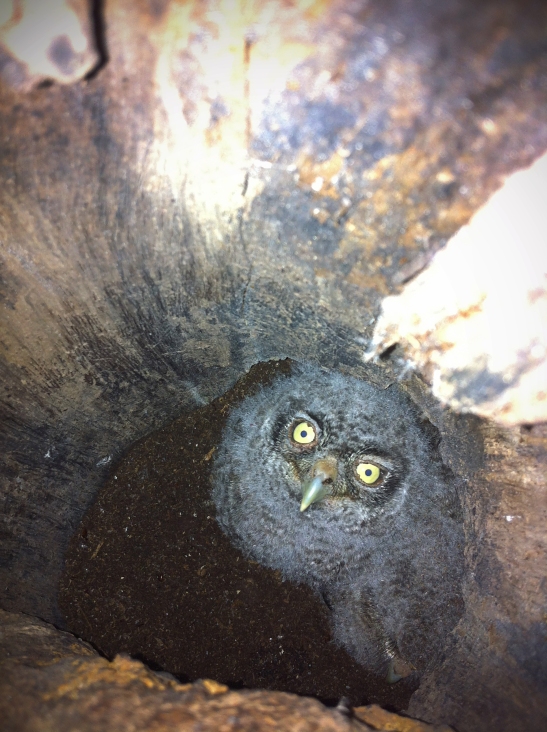 This wasn’t my first attempt; only one of about 12 I took shooting blind so to speak. I was able to fit my iphone — just barely —  into the hole in the tree leading down to the owl’s sanctuary. Only a cell phone camera could capture this. It’s not that there’s something unique about cell phone cameras. It’s mostly the flat shape of cell phones in general and location of the camera lens at the far corner that facilitate taking photos from odd angles. And in that regard the iphone’s lens placement is perfect. I still feel guilty bothering the owl with my camera and flash, but at least I knew I wasn’t a threat. Can anyone identify the species? Is this a barred owl? It doesn’t look like a screech owl, but what do I know? I just can’t tell. Oh and if you look towards the lower right of the photo, you can spot an extra ball of fluff, a beak, and long eyelashes. It’s the chick mama owl is guarding!